BRIDGET PARRIS: Dresses up your table 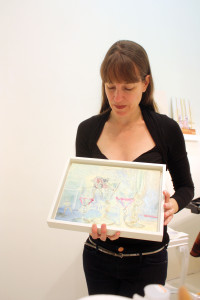 Bridget Parris holding one of her whimsical paintings.

Imagine sitting at your best friends dinner table more befitting of what you would expect from the  late Fashion Designer Alexander McQueen. The guest in a wildly festival partying mood and laid out before you is an outrageously hyperstylized table that’s arrangement is whimsical and subliminal flowing with oversized candle holders, odd shaped water goblets, and unusual textured linens. These same forces are what drives Bridget Parris imagination to create beautiful and outlandish tabletop and textile designs.

Bridget Parris has parlayed a fine arts degree in painting into an award-winning career in tabletop and textile design. As if that’s not enough, Parris has broaden her repertoire with another degree in fashion design at Parsons the New School of Design in Manhattan. Parris spends much of her artistic energy merging home décor with fashion, seeking out the best of each medium to implore in her work.

Bridget Parris’s studio located in loft-like building in the trendy Williamsburg section of Brooklyn. The space is small, but welcoming bright white walls are graced with a series of colorful paintings depicting lively whimsical figures catch and delight the eyes. These paintings represent her love of everything French.

Bridget Parris was born and raised in Milwaukee, Wisconsin. Today, her beloved former city is considered one of the hottest design places in the country touting company’s like Kohl’s, four major design schools and a slew top design firms. Growing up, Bridget admits this was not the case. Creative problem solving in Parris’ blood; her father a German immigrant worked as a Research & Development Engineer for Johnson Controls producing heating and cooling systems, and holds six patents and. Software copyrights. Her mother a high school mathematics teacher steered her two children towards local cultural activities and to follow their bliss.

Parris says, she was drawn to art at an early age and later supported by her high school teacher. Enrolling in Southern Illinois University, urged by her father to study art education convinced she would always have a study job. Bored in her first year Parris switched to Fine Arts studying painting, graduated in 1991. Eager to learn new things and explore she earned a MFA in painting and drawing in 1994 from Louisiana State University. That same year with only a drawing and painting portfolio, she moved to New York City. But realized that was not enough took textile design classes at School of Visual Art built-up her portfolio and supplemented her income with a temping job in Macy’s hard good department.

But, as fate would have it, her then boss Jill Anderson, Brand Manager eyed Bridget doodling in a notebook. A quick conversation ensued and Parris was introduced to Alex Bates, Design Director of the textile Department. Parris was hired to freelance in the hard goods department, where she later honed her 3-D technical drawing skills.

Within a few months Bates recommended Parris for an entry-level design position. Parris was stunned that she was hired and that she beat out more highly skilled industrial design students from Pratt Institute. She credits having studied painting and drawing over Industrial design, and that Bates liked her.

At Macy’s Parris blossomed; creating seasonal product lines and interfaced with the marketing department, plus traveled twice a year overseeing production with vendors and suppliers in Italy, Portugal, Poland, Asia, India and parts of Mexico. These vendors taught her the importance of craftsmanship.

Parris left in August 1998, consulting as trend forecaster and advised clients on the latest trends in color and fashion themes translate into new product lines. Later that same year she setup studio in Dumbo’s artsy neighborhood nestled between Manhattan and Brooklyn Bridges. (Only to be priced out five years later).

Branching out in 2004, Bridget Parris landed a plum position as Senior Designer for Anthropologie home stores and catalog division. Parris described, her experience as being more experimental, but it was getting to draw everyday made that job a heavenly experience. She created some of her more distinctive designs such as glassware, lamps, clocks, ceramics, frames and vases. Parris explains that, Johanna UUrasjarui, Design Director, put her through a rigorous test creating a series of moods boards for seasonal line of new products. Creating series of elaborate mood boards composed from piles of magazine and catalog swipes, fabric swatches, and household objects, she composed vignettes that were photographed and sent off. It was with these extraordinary mood boards that she landed the job. With her career soaring, and her designs were featured in home décor and lifestyle magazines from Oprah Home, Real Simple, InStyle and Domino and on the lifestyle blog designSponge. 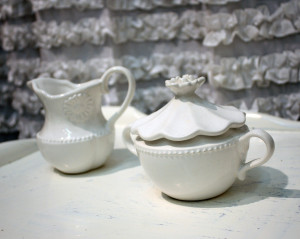 Pitcher and Creamer designed for Anthropologie

Clicking through Parris’ online portfolio, showcases the brevity of her designs every thing from organic shaped ceramic vases, dishes in a dazzling array of colors; brass doorknobs, garden bubble glass and retro inspired jewelry draw pulls. Parris’s influences are broad; from her fine arts and fashion design education she cites influences from French Decorative Art, Alexander McQueen and 70s textiles patterns. Pattern and forms play a big influence in her work, and is combined with research on French Dansk wallpaper, Maria Antoinette’s fashions, old engravings, and objects found in nature. 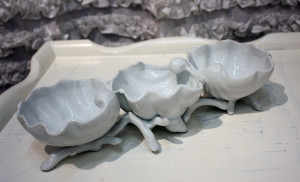 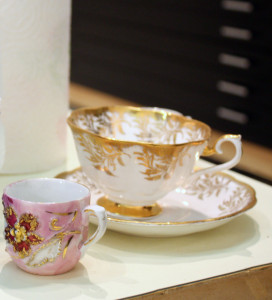 Her inspiration for the Summer Collection was a mixture of Moroccan and Palm Springs Style inspired by the colorful palette of lush oranges and pinks, and Palm Springs Green with brilliant White. Parris designs included a beach bags, hostess aprons, picture frames, a shell shaped porcelain teapot with sugar and creamer, lotus flower shaped soaps on a leaf shaped dish, there was even a tennis racket cover/bag and cases for sunglasses.  For indoor tabletop, she designed a fabulous collection of mouth blown borosilicate glass vases, bell jars, candleholders and server ware inspired by Medieval Venetian Glassware she collaborated closely with design director, Mark Ross of Two’s Company, for this collection.

Parris left Anthropologie in 2009, moved back to New York City once again consulting as trend forecaster and teaching senior thesis in the Product Design Department at Parsons Design School. That same year for three months starting in May, Parris was artist-in-residence at the Museum of Art and Design Open Studio. In an airy top floor studio filled with natural light flowing from tall windows looking out over Columbus Circle, she produced a tall Grecian column style Porcelain Lamp and displayed molds, technical drawings, her portfolio, plus several ceramic products designed for Anthropologie Stores and a few ceramic sculptures. MAD’s open studios differ visitors are welcomed much like in a gallery setting to watch and engage Parris as she is working. 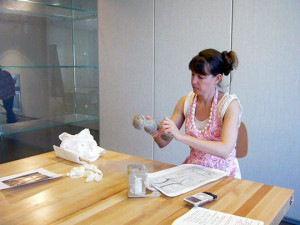 Bridget working on a lamp at the Museum of Art and Design during her residency.

Sitting in her Williamsburg studio we chatted about many things from; her paintings, Alexander McQueen’s outrageous headpieces featured in the “Savage Beauty,” Exhibit held in 2010 at the Metropolitan Museum. Parris describes McQueen’s style as follows, “He has a unique way of working with shapes, and he meshes materials together; that challenges the notion of consumer’s imagination beyond typical tabletop design. She simply states, “I love the Gold Gilded Cage; it’s a beautiful example of craft at its highest level.

Today, home goods design seriously diminished we’re a culture over populated with low budget products made by retailers such as Ikea, West Elm and Pottery Barn makes it hard to compete or for designers to create quality work.

Now, I enjoy long conversations with my dad about how products are made. And it feels good that we connect over design.

Bridget Parris works can be viewed at http://www.bridgetparris.com

Xenobia Bailey: The Aesthetic of Funk

FiberPhilly2012: Get Your Fiber On!

Social Media Is Changing the Way We Decorate