New York City is a thriving metropolis, brimming with activities, 24/7. It’s one of the reasons I love roaming the streets, as a tourist in my own city. I get to experience the unique rhythm of various neighborhoods and look at each environment from the perspective of an Architecture or Design Critic.

Either way, it’s a joyous experience.
If you look at any New York City map, you notice that Manhattan and Staten Island are islands unto themselves. A quick glance to the east are Brooklyn and Queens, really one large island, but the two largest boroughs. What tends to escape many New Yorkers and visitors are the other islands that surround the city, six in all, each accessible by bus, ferry or tram. These Islands include Ellis Island,

Solution:
My goal for the “The Other Islands” app, is to offer NYC residents and tourists an easy way to plan a day-trip to these “Other Islands.” This storyboard is a visual narrative that depicts a group of three friends who are visiting NYC for two weeks.  After the first day, they decide to explore the city’s great communities. After searching online, the friends discover, “The Other Islands” app. They easily upload the app, then decide to visit the Ellis Island National Monument.

When the group starts out, the storyboards captures them huddling together to map out their travel route, taking the subway to Battery Park in lower Manhattan; then catching the ferry across the New York Harbor to Ellis Island. The friends disembark, then walk along the pathway that leads to the Museum. They soon realize that the Other Island app can also be used to navigate the interior space of the Ellis Island Museum. In addition, the app allows visitors to save their route information for future trips.

This same scenario can be used for all the Other Islands. 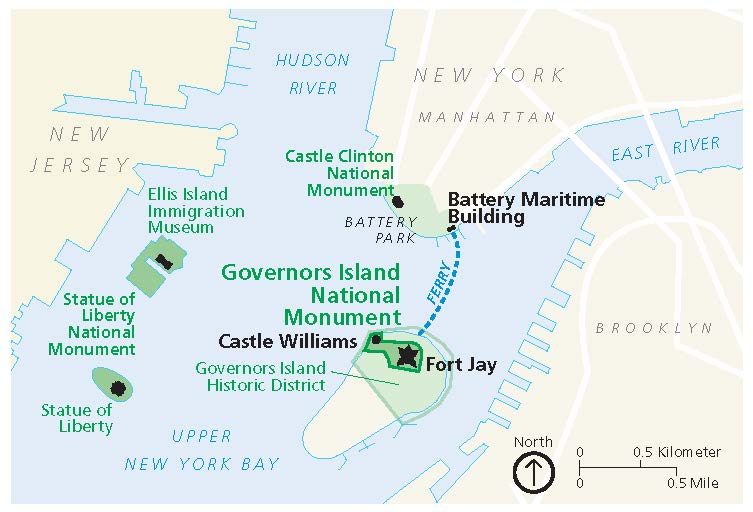 If you’ve ever had an injury that required that you use crutches, to get around, then you know how frustrating navigating the NYC’s public transportation system can be. I came up with the idea for this app a few years ago after spending a summer recouping from a foot injury. I chose to use a knee scooter rather than crutches as I navigated the MTA transit system.

At times my experiences were daunting and arduous–to say the least–but I soon wondered how many other people have had similar experiences. This app will help riders identify MTA stations with elevators and it also can be used to alert bus drivers that a disabled rider is waiting at a bus stop.

Subway:
It’s not easy locating the MTA website section that lists subway stations with elevators. The site also informs riders if the station elevators are operational. Other issues include wayfinding signage in subway stations that directs riders to those elevators. (Current signage are often hard to locate and poorly marked.) I learned that the MTA does not offer elevator service in every station, and that elevators in the outer boroughs are almost non-existent.

Buses: Buses are either equipped with ramps or lifts to assist disabled people.
At certain times during the day, some bus routes have more senior riders, many of whom use wheelchairs and walkers, and mothers with strollers, or include people (like myself) with knee scooters. Oftentimes, people standing at the bus stop do not allow people in wheelchairs to easily access the bus. Currently, buses can only accommodate two people with wheelchairs, and about 4-6 people with walkers if the buses are not crowded.

Solution: My goal in creating this app would be to provide a more efficient notification system for disabled people, or those with special needs who currently must stand at the bus stop to alert bus drivers that they will need assistance getting on the bus. An alert would encourage the driver to pull closer to the curb and to request that riders move from the front seats reserved for seniors and disabled passengers.

Another function of this app would be to assist people on the street in identifying particular subway stations in their immediate area that have elevators; they can get text or email alerts about elevators that are out of service.

I love riding my sky-blue Cannondale bike all over the city and certainly prefer it to taking public transportation. In the past few years, New York City has made a major effort to become more bike– friendly, including adding bike lanes and incorporating the Citibike system. In addition to attendant safety issues, locating bike lanes and bike paths that run along the perimeters of NYC can present problems. One needs a bike map to locate bike lanes as well as the best routes for safe, easy riding. There are maps that are oversized, or foldout brochures these are not easy to use while riding.

This storyboard would convey the ease of downloading the Bike Navi app on rider’s phones, as well as mounting the phone to a sturdy bracket device on a bike for mapping-out the best route. (The bracket needs to be sturdy, so as to avoid the vibrations that can disrupt the consistent data-flow).

New York City is considered bike-friendly. The current and former Mayors have blocked off midtown streets for pedestrian and bike travel, and created bike lanes in specific areas of Manhattan, Brooklyn, and Queens.

This app links to the Bike Navi website and allows riders to store route information so they easily start out plotting from home, then link to the app that will offer the best routes for navigating city streets, bike paths and over bridges to their destination. (Sometimes I like to ride without any planned destination. But with these storyboard sketches, I choose to map out my riding, from Upper Manhattan into Brooklyn, over the Brooklyn Bridge, using the Hudson River bike path.  I must say this is a rather scenic route with the New Jersey coastline on one side, offering swiping views of parts of Jersey City, Hoboken, and a few other Hudson Waterfront cities}.

I ride my bike everywhere and have easily identified paths for quickly getting to certain locations. It can make for a more fun-filled day.